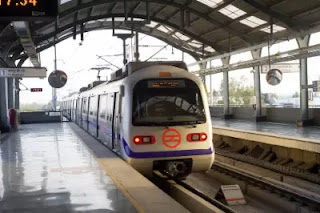 Delhi Metro Rail Corporation (DMRC) announced the launch of free WiFi across all 50 stations on the Blue Line of Delhi Metro.
This is the most populated and longest stretch of metro, spanning from Dwarka (Dwarka Sector 21) on one side to Noida (Noida City Centre) & Vaishali on the other, covering North, East and Central Delhi along the way.
This is an important connector, because this line joints Delhi with Noida on one side, and Ghaziabad on the other. Availability of free WiFi on this route will instantly connect the thousands of passengers with high speed Internet, thereby expanding Digital India’s mission.
DMRC’s Managing Director, Dr. Mangu Singh formally announced the launch of Free WiFi from Rajiv Chowk metro station, which is the central hub of this line.
In a press release , DMRC said, “The Delhi Metro Rail Corporation (DMRC) today launched ‘High speed Free Wi-Fi’ facilitiy at Metro stations on its Blue Line i.e, Line-3/4 (Dwarka Sec-21 to Noida City Centre/Vaishali).”
When passengers on this Blue Line will search for wiFi, then they will be able to connect to “Oui DMRC Free Wi-Fi”. Registration would be possible using their mobile numbers, wherein an instant OTP based process has been designed.
Once registration is over, the passenger can seamlessly connect with the Internet, and access “email, Face book, Google, video chat as well as live streaming of cricket and football matches etc.”
Kaspersky Launches Free Antivirus; Here’s How To Get It!
Delhi To Get 100% WiFi Coverage in 24 Months, 700 WiFi Spots.
Delhi Metro Will Provide WiFi For All Passengers; Invite.
Indian Railways To Introduce WiFi Across 400 Stations &#038;.
For rolling out this free WiFi service, DMRC has collaborated and partnered with a consortium led by M/s Techno Sat Comm.
Now, this is the same company which provided WiFi infrastructure on Airport Express line, which was launched last year in October . There are only 6 stations on this line, and passengers can use free WiFi from Delhi Metro on this route.
Besides, Techno Sat Comm also provides WiFi on Delhi-Howrah Rajdhani Express, which incidentally became the first train to have this facility.
As per DMRC, this company uses the advanced “T-Track 2.0 Wave 2 Solution” technology, which has powered WiFi across several high speed trains globally.
In the next 6-9 months, DMRC plans to launch “Oui DMRC Free Wi-Fi” across the Yellow line metro as well, besides launching metro services inside trains on the Airport route.
Delhi Metro, in 2015, had promised free WiFi for all passengers , which has been now partially accomplished.
Interestingly, the press release from DMRC hasn’t mentioned any FUP or any form of data limit for the Free WiFi.

Google Has The Algorithm To Remove Watermark From Copyright Images; And The Technique To Prevent It

If you’re on social media and have created something on your own, you would know the importance of a watermark to protect your copyright. No one wants to have their images or photos shared online without credits. A watermark is the easiest way to post online without asking for credits. google_ad_client = “7371337780078642”; google_ad_host = […]

Xiaomi working on an Android One smartphone: Report